City Screen, my local cinema, promised that ‘Spike Lee directs and gives arguably his best on screen performance’ in Do The Right Thing. I was sold — I mean, BlacKkKlansman blew me away and I’ve wanted to see more of his stuff for ages.

Nobody warned me about this.

I don’t like people being rude. Or inconsiderate. I don’t like people yelling or bothering others. I was so annoyed at the kids bothering Sal, a hard-working, profoundly considerate and ultimately forgiving man. I was so annoyed, I rooted for a culmination that would bring order. But. . .you didn’t have to kill him. Watching the trailers before it started, I was curious whether this film, from 30 years ago, would point out that history repeats itself. If we’re going to see unintended political commentary of stuff going on in 2018. I didn’t realise it would be as obvious. In a recent post, Brittani pointed out that Spike Lee isn’t subtle, and he sure as hell wasn’t three decades ago either.

The beginning is slow, much a like an unbearably hot summer day. I was (a) praying for the pace to pick up, because it was 9pm and I’d had a long boring day at work, and (b) trying to contextualise 1988 in history (my aunt was born then; King had been assassinated 20 years ago, etc). It did pick up, and it was funny, and I relaxed back in my chair, laughing with my friend, trying to make sense of why a scene between two brothers was so homoerotic.

And then, as I was expecting end credits to roll in a second, and admiring how fast two hours had passed, everything went to shit. The day ended, but the film didn’t. And so guilt and anger and fear and disbelief layered over and over. The inability to label the good guys and the bad guys paralysed me. If you’ve not seen Do The Right Thing (and god, you should!), the sweetest scene in the world escalates into something all too familiar (albeit from phone, not cinema screens), especially ever since Black Lives Matter got started. 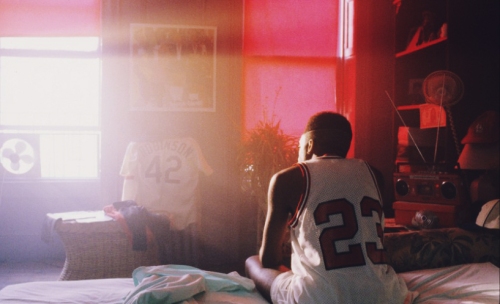 After taking you through a day in a Black neighbourhood in Brooklyn with vivid colours, hilarious dialogue and spectacular cinematography (as if he’d known young girls with a waking conscience would be watching this thirty years later, far removed from U.S. culture and desperate for context), Lee dares us to think. He won’t draw lines between good and bad, doesn’t label heroes or villains. He is impossibly objective, which means we can’t be.

This review has been impossible to write. I don’t know what to say. Do The Right Thing broke my heart and just left it there. The more I think about it, the worse it gets. Over the past 30 years people have written about it so much, all I’ve got left to add is that it remains as powerful and provocative in 2018 as it was in 1989. And that Spike Lee is an exceptional filmmaker.

By the way, when doing research over summer, I also stumbled upon that photo of Malcom X and King, the only one taken of them together. In the film, Lee uses it to foreshadow the ending, and then tells us he did so in the end credits–where he quotes both, MLK advocating for nonviolence and Malcom X for self-defense. How f–king brilliant!

This morning I saw someone tweet ‘doing the right thing is never wrong’. Actually. . .

This entry was posted in 1980s, film, review. Bookmark the permalink.