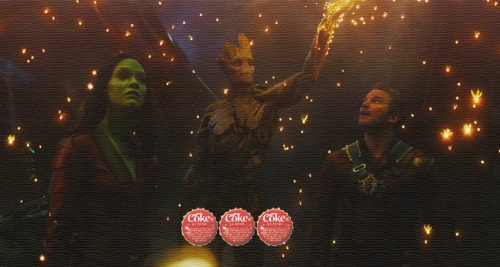 I didn’t really know what to expect from Marvel’s latest. I don’t read comics, so all I know about Marvel is from all the Avengers, whom I really and truly love.1

What those films really won me over with, was the humor. Guardians takes it to a whole new level, though — I’ve never heard the theatre laugh so loud, and so much. Halfway through the scene where all the Guardians meet, I leaned over and told my friend, “this is the funniest thing I’ve ever seen.”2 I guess that this threw some3 people off, but I had so much fun with it that I don’t even mind. It was actually kind of cool, to have a film that is all kinds of epic but has unconventionally many laughs.

Another great thing are the characters. Rocket is in a whole league of his own, but his relationship with Groot and the rest of the world is wonderful; Zoe Saldana lands one of the greatest female superhero roles there are, which I’m eternally thankful for, and Drax has unexpected depth to him. Star-Lord is a talking and walking cliché, but he’s a lot of fun and doesn’t cross any borders. His playlist is awesome, by the way!

Guardians hits and misses with two things for me — gets a bit too messy and hard to follow, which is easily solved by just accepting that there is a whole loud background noise going on; but harder to ignore is that at times, it becomes enormously cheesy and sappy, and it’s not fun to watch. Long, emotional speeches and stories of past? Get out. Not interested.4 It distracts, but in the end, the time spent laughing tops that, and that’s what I will remember from this film. And the characters.

___________________
1 I used to think Iron Man is really hot and the PTSD made him even more admirable. You want mature opinions, you come to this blog, right?
2 Alright, I was exaggerating, but only a bit. It’s the funniest thing I’ve seen ever since the Lemmons scene in The Wolf of Wall Street. I almost pissed my pants — had this scene come in half a coke cup later, I would’ve done it for real.
3 weak
4 But damn, how sweet was “We are Groot”? Almost made it worth the sap.

This entry was posted in 2014, cinema, film, review and tagged Guardians of the Galaxy is awesome, Marvel, Rocket, Rocket with a machine gun, Zoe Saldana. Bookmark the permalink.