So I started watching Arrow

Happy autumn and greetings from Norway! I’ll address my (despicable) absence in the next post. For now, I am just very eager to get something out there. So until then, enjoy a very rusty TV post. (I’m not kidding. If my writing skills were a box, it would be buried under dust with dead mice, sounds of bats and spiderwebs all around.) 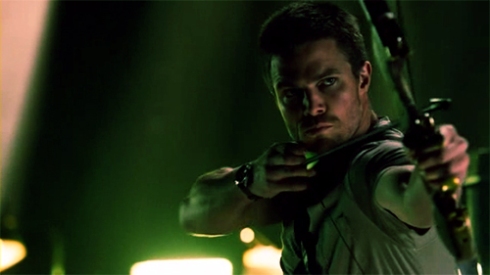 Most of my favourite TV series (and books) were introduced to me by my best friend. A few days ago, she tweeted that Arrow was the best TV series she’d ever seen – and she’s an enormous Supernatural fan. So, naturally, I scolded her for belittling Supernatural but also watched Arrow that night. I have now seen the first two episodes and I’m torn.

Okay, firstly: I don’t like it. The character dynamics are stereotypical and clichéd – and not in the cute, entertaining way as I’ve witnessed with a few other series and films. In the pilot, there are quite a few surprises but already by the second episode, it becomes annoying. Don’t even get me started on the characters – because honestly, I’ve seen each and every one of them before. The overprotective police father is a dozen too many and Tony Stark has ruined me for any other billionaire playboys.

Alright, there is an allure. But at least for me, it’s hardly noticeable through all the crap. There are abundant overdramatic scenes, of which the most annoying are him pulling on the green hood and the (also dramatic) cameo of his bows and arrows and other weapons. I understand he became superhuman when he had to stay alive on that deserted island but his skills are a bit too good. It’s not believable. It could be, but the setting and feel of the series effectively makes it impossible.

I will probably watch at least a few more episodes of Arrow but I kind of feel like I’m wasting my time on that one. Then again, since people watch it, maybe I simply haven’t gotten into the good part. I’ll get back to you on that one.

This entry was posted in 2013, television and tagged 2013, arrow, crap, television, the US. Bookmark the permalink.

11 responses to “So I started watching Arrow”