April 15th, Emma Watson edition: thank you for being yourself. 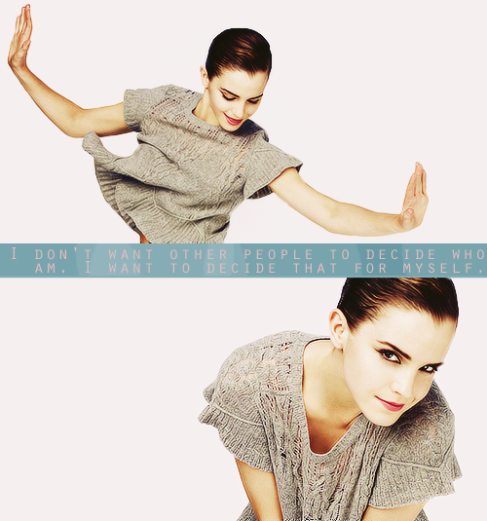 She’s the first actress I ever loved and that affair is still going on.

Emma Watson is a person rather than an actress. She’s opinionated, smart, witty, lovely and quirky – and she doesn’t shy away from that. I grew up with her on my television screen and she was Hermione for me; and now she’s Emma Watson, versatile and amazing. She proved herself anything but one–faced as Sam in The Perks of Being A Wallflower and if that didn’t settle it, after seeing the trailer for Sofia Coppola’s The Bling Ring we all went ‘Hermione who?’. She has fan donate to UNICEF rather than send her presents and she has an eco friendly clothing line. She cut off her hair knowing people wouldn’t like it and stuck with it. I started loving it as I started understanding that it’s her. She won’t let us tape a sign that says HERMIONE FOREVER on her. She just won’t, she’d rather go off and study at an Ivy League university.

Seeing her in My Week With Marilyn was  favourite surprise in cinema last summer. Emma Watson said she’s going to do smaller parts in smaller films for a bit, so she went on and did just that. A lot of us, Potter–loving fans, got to know independence and courage from the girl who is not merely an actress but is an inspiration. So happy birthday, Emma, and I hope you got my fan letter seven years back. I didn’t put a stamp on it but with your magic, I couldn’t ever know.

This entry was posted in 2013, birthday, film. Bookmark the permalink.

8 responses to “April 15th, Emma Watson edition: thank you for being yourself.”