I have a lot of mixed emotions about this film. I guess it’s mostly because suddenly everyone is writing about it (some links below, too) and I think I’ve taken their opinions too seriously. I’ll try to speak from the heart still, though.

First off, a confession: I have never seen the 1939 film1 and my avoidance of anything spoiler-y (with this, I haven’t even seen the trailer) along with the fact I last read the book about eight years ago created this situation where I had no idea it was a prequel and thus, didn’t know to appreciate it – because now I think it was handled in a genius way – when watching the film.2 I think the 4:3 monochrome intro was excellent, though. It added the ambience of 1905-ness and created a mood.3

The cinematography and CGI were the strongest parts of the film, overall: the 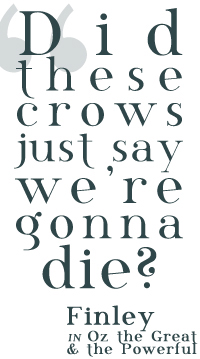 camera work, for example was incredibly enjoyable and impressive. I was incredulous about the land of Oz at first but then I realised it’s meant to be like this: it’s not our world. And ten points for not even trying to make it like the real world. It felt ethereal but in a good way – eventually. Plus China Girl, who stole the show with her witty lines and her general charming existence. And wow for the intro. They actually used 3D well here!

Which made it sad to see Franco giving such a mediocre performance. It felt forced, far-fetched – even without knowing he was the third choice4 I could feel it. He saved some of it later with the latter part of the film, the part I absolutely loved – the part where he was talking from the smoke. That was incredible. I liked his mentions of Edison a lot and using magicians’ science as well, all which contributed to making him more likable.

Theodora’s transformation and character development were a disappointment here, too. Mila Kunis played her part outstandingly but there’s not too much you can do when your character is merely brushed over. She had potential at first but her change was essentially too much too early. The beginning part with her was cool, though. Oz definitely had his way with the ladies.

The promised other people who wrote about it (naturally awesomely): Cinematic Corner, French Toast Sunday and Dan the Man. Go read. I dare you.

This entry was posted in 2013, film. Bookmark the permalink.